How to buy a hot air station for laptop & cellphone repair. 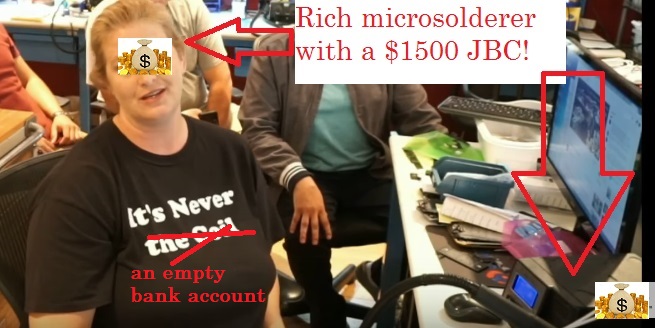 How do you make a choice? Why do hot air stations range from $50 to $1800 and what makes them different? How do I pick the right one for me? I’ve bought the wrong equipment and I use these tools every day in a professional environment. I will walk you through EVERYTHING I wish I knew when I first pulled out my credit card to buy a station. 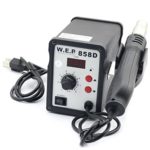 This station is only $57, but good luck getting anything off a multilayer PCB with it! 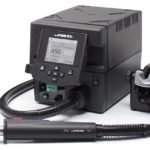 This hot air station is perfect & makes repair a breeze, but is $1500, which leaves you bankrupt.

You can buy an Atten 858D for $58 or a JBC JTSE for $1500+. The cheap station doesn’t do the job, the expensive station makes you too broke to pay the electric bill. Neither make sense for someone NEW to our business. A JBC has nice features, but do you really need a station that can save graphs of your activity?

Don’t mistake my statement as an argument for a $50 piece of crap! People often message me saying they do not need something great because they are just starting out. This is bad thinking! When you are just starting out, you need equipment that is “known good.” When you are new, you have no way to tell if bad results are due to your technique or your equipment. You will blame yourself for what is actually an equipment issue and never improve. Even worse is if your station is fit for a single layer PCB, has a bunch of good reviews, then you try it on a multilayer PCB and it fails. “It has such good reviews, it must be MY fault!!” is something I commonly hear.

Even worse is when you actually find the cause of the problem on a board, but then kill its CPU or something else with cheap hot air. You figured out the problem – great, but you never get to see if you were right because you killed your board roasting it to death with a $55 hot air station. This ruins confidence and desire to learn. With hot air you want to get in, and out, as quickly as possible in a precision manner.

When you are just starting out, you need equipment that is “known good.” When you are new, you have no way to tell if bad results are a result of your technique or your equipment.

By far, the single most important attribute for any type of serious professional rework is the power of the station. If you point the nozzle at the board and the component you are heating does not come off, you’re not going to bill anything. Cheap stations, fringe stations, and also ALL IN ONE stations are often low energy. 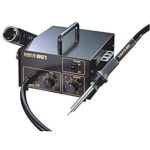 This Hakko 851 has less than 6 liters/minute airflow. This means its blowing is weaker than a 59 year old whore. At $650 & incapable of removing a touch IC, it’s as expensive as it is useless. 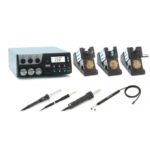 Weller’s WR3M seems like the ultimate all-in-one tool until you realize that even at its high price it only hits 15 liters/minute of airflow.

Unfortunately, this is difficult if not impossible to properly judge over the internet via spec sheets. Many companies make wattage/temperature/airflow claims that never stand up to real world usage, especially cheaper stations. Some do not publish them at all! 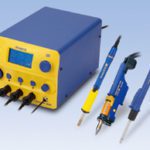 The FM-206 allows desoldering, hot tweezers, and soldering all from one station, but its included hot air doesn’t go over 6L/minute.

When it comes to airflow, you want something that can do at least 20 liters/minute. Larger chips will be difficult to do without going to 30-40L/minute, but at the very least 20L/minute is desired. Airflow is how powerful the pump/fan that propels the air forward is. Even the hottest hot air station will be useless if it cannot propel that hot air forward onto the board/chip you wish to heat and move it into place. Keep in mind most all-in-one stations that try to combine hot air & soldering into one device, while convenient & savers of desk space, have terrible airflow.

Stations that get put in the hall of shame are below for not having enough power to get the job done.

Hot air differs from standard soldering in that you will often want to adjust airflow and temperature. While a soldering iron can remain at 750f or 840f for the entire duration of a board repair, a hot air station’s airflow or heat you’ll want to adjust based on what you’re soldering. airflow may be desired. If we are soldering a larger IC that is far away from anything vulnerable to heat, high airflow is fine. If we are working on something right next to a CPU, lower airflow may be desired. The ability to adjust these attributes quickly is important. If adjusting temperature or airflow is difficult, the technician will be incentivized to “work around” using the “wrong” setting to save time and this helps no one.

The Hakko FR-810 is a clear example of the worst interface on a hot air station I’ve ever seen.

The Quick is not the best interface – knobs are preferable, but still far more acceptable than Hakko’s junk. 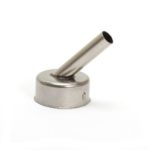 This bent nozzle makes workng under a microscope at an angle easier.

Bent nozzles are great for working with a microscope. When working under a microscope, you can’t point the hot air directly at the board from above. It must be placed from an angle. This gives you less direct heat on the board. However, if you have a bent nozzle available, then you can have the benefit of direct heat on your component while under the microscope. As you angle the hot air to fit it under the microscope, the angle of the nozzle allows the nozzle to shoort air directly down on the board. We will be offering bent nozzles for the Quick 861DW shortly!

We must also consider the size of the nozzle. Using a 2mm nozzle to remove an SMC will never work, and using a 10mm to remove a tiny part on a cellphone is overkill. It’s best to buy a station that has a good number of nozzles between 3 and 7mm available. 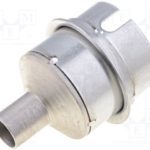 This straight nozzle makes working under a microscope at an angle more difficult.

Our current pick for hot air station is the Quick 861DW. Why?

Buy a Quick below! 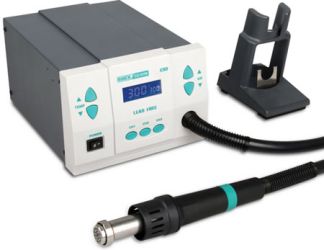