How do I fix a black screen on Touchbar MacBook Pro?

Is it actually no image, or no backlight?

There are two major design flaws on the Touchbar Macbook Pros – one, Apple fixes for free. The other, they do not. So, of utmost importance, is figuring out if your issue is the one Apple covers for free. How can you determine if yours is an issue they fix for free? Let’s see if your issue is no backlight or no image. The former, Apple fixes for free outside of cases of liquid damage – the latter, they do not.

Apple has a free repair program that covers Touchbar Macbooks with no backlight.

Apple made the flex cable that goes from the LCD screen backlight to the control PCB too short. This results in the cable that supplies backlight voltage to the screen’s LED light strip breaking over time. This often requires a replacement of the entire display assembly. Apple at first ignored the issue, while simultaneously updating the design with a longer cable so that newer machines would not be affected. Apple has a service advisory on their website stating they will fix this problem free of charge.

If the screen is very dim, but you can still see the picture – you may be eligible for this program, and Apple will fix the machine for free.

If you have no image, this is a different design flaw entirely.

On these machines, the eDP(embedded displayport, protocol for image) data line from the CPU to the LCD, is right next to the backlight voltage line to the screen. This means that a 52v power line is right next to a 1.8v data line on the connector – and that 1.8v data line goes right to the CPU. On older Macbooks, there was typically a ground pin sitting between backlight and image data pins. That is gone.

This makes the machine very susceptible to humidity/dust causing a short circuit whereby the backlight voltage short circuits to image data, sending 52v straight to the CPU. This results in the CPU image circuitry being fried entirely. It looks like this on the display cable. 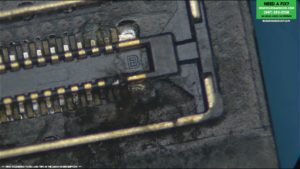 This is a Touchbar Macbook Pro display cable after the 52v from the backlight line has short circuited to the 1.8v CPU data line right next to it.

On 15″ Touchbar Macbooks, the situation is a little less dire – the image data line does not go straight to the CPU, but rather to a mux chip – that switches the input of the display between the dedicated graphics chip & the CPU integrated graphics. This is a simpler repair as the mux chip is more readily available, cheaper, and easier to solder on than a BGA CPU.

If you have this issue, it will present as no image – even if you look closely, it will not be there. This is not a dim picture – it is no picture. This issue is not covered by Apple.

What does it cost?

Most no image Touchbar boards are going to be $425 + tax for board repair, and cost can go up if it is the CPU that is bad rather than just the mux chip. With board repair, we only charge in the event of a successful repair – there is no fee(besides return shipping for those mailing it in) if we cannot repair your issue.

Check out a real Touchbar no image repair!

We do not outsource any of this work, it is all done at our store. Here, you can watch Paul salvage a board that has had 52v sent to its mux chip. We believe doing all the work in-house is best for turnaround time and communication with the customer.

Call or Visit Us

Top Reasons To Have Your Repairs Done By Us

WE CAN FIX YOUR PROBLEM