This story begins on early August when we signed a contract to design a new site. The price would be $4600, with a down payment of $2300. Around August 10th, my site was transferred over to their server for development. The first red flag can be read in the email I received revealing that delays in getting the site transferred to his server were caused by a misspelling of my name. Spelling errors are lame to criticize someone over, but are relevant when delays in transferring the site over are used as the primary excuse for all of Demski’s failures.

Two months in, Andrew Demski emails me to take a look at a page he’s designed.

Weeks after pointing out how bad the design of many pages were, Andrew says he has a design for me to review, that he would like to use as the template for the site’s other pages. Great.. right?

After hiring a firm for $4600 to design a website, there is no greater nightmare than being two months in and seeing what you see below for approval. He used the verb design to describe what he had done in this transformative process on October 11th.

This is his newly designed page. This is terrible. 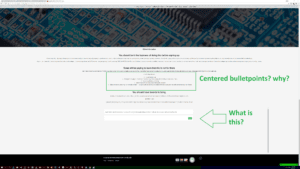 Look at Andrew Demski’s newly designed page. The random text centering. The form at the bottom that doesn’t belong, that leads nowhere. 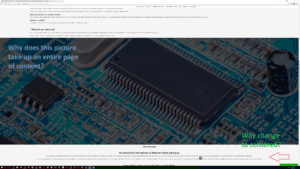 Note the random text centering at the bottom of Demski Group’s design. 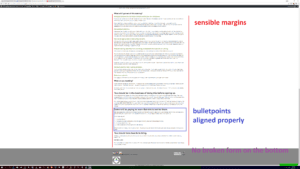 Here is my *original* website. Notice how the bulletpoints have sensible margins, proper indenting, no random centering. There are no broken forms at the bottom of the page. 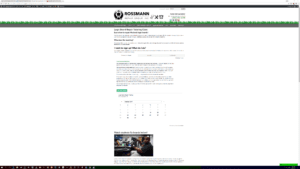 My site may look dated, but has sensible margins and readability.

One may think my criticism of what you saw above was harsh on October 11th, but there is a reason for this criticism. Almost two weeks prior I had pointed out that the bad formatting and appearance of the site as it was was unacceptable, and that I needed to see better design. He knew I was expecting a good looking page.

I told Andrew that I needed to see something that looked proper in terms of page design. Being over six weeks from the point at which I paid, and being that the contract specified approximately 30-45 days, I was dismayed at the site’s appearance to this point.

Look at my original site on the left. Look at his site on the right. Look at the formatting, the fonts, the way the content pops off the page. Which site is my old one? Which is the new $4600 one from a U.S. designer?

I’ve had websites done in the past in the $300-$500 range. https://mailin.repair is one of them! I had spoken to Andrew Demski on the phone to explain what I wanted the new site to be like. My overall desire was to avoid the lack of cohesion that results when people who don’t speak English from freelancer/odesk are creating a site with no concept of design or common sense. I was clear that I do not have a great sense of aesthetic taste or design, and that I wanted someone skilled in that matter to take care of this. I was never expecting that the person I hired for $4600 would be considerably worse than I at this task.

Imagine my surprise when 2 months in, the call to mail your device in is spelled as it is below. I have no problem with people that do not speak English, but it is necessary that English be a primary language for someone designing our site so errors like this need not be pointed out 7 weeks into the process.

Nothing spells outsourced to freelancer.com for $200 than having “Main it in!” on the front page of your *mail* in repair webpage.

We emailed so many times. We spoke on the phone. We conveyed expectations and at the end of the day, the homepage doesn’t even have separate pictures for tools vs. ultrasonic cleaners. This was brought up three times. At some point, he emailed asking for code I had already sent him for a scheduling page, and said it wasn’t included in the scope. We’re 6 weeks in, and he is asking for something I sent at the very beginning of the project. I send this email October 3rd.

email one, with my reply.

At the point that he had no recollection of conversations or emails about specific features we had discussed, with code I had sent, at the beginning of the project, I lost confidence that any of this could be remedied.

We had talked on the phone about adding the page for scheduling a pickup/dropoff page that included this code here for the scheduler. https://bpaste.net/show/3772ebb80db4 It wouldn’t require you coding a scheduler. This is why it worries me that you are emailing me asking for the scheduler page on my original website when I had said on the phone that this was a new feature that didn’t exist on my original site.

Andrew, I want you to tell me what you would do if you were me. You need a site and say you need someone who understands what you are trying to do – that you want a real designer, not a $250 odesk designer who pastes chunks into a template with no understanding of the intended goal. You agree to pay $4500+ for this.

You get a draft from the developer and have to tell them that mac laptop repair, mac laptop repair services, macbook pro repairs and retina macbook repairs was redundant on the front page. Why does he present this to you like that? Does this not seem redundant? Anyone can populate a website and move text chunks around, but you need DESIGN. By design I mean where you do not have to tell someone this is redundant, that you just intuitively realize “hey we repeated ourselves 3 times.” This is the difference between odesk and $4000+ U.S. located developer.

The front page says “main it in” instead of mail. Why is the developer presenting this to you as a draft? Who is spelling mail as main? It isn’t him, because someone who speaks English would not make this specific kind of spelling mistake and email it to you as a draft on a $4000 site. Someone on odesk did that.

We’re six weeks into development and pages like this are being presented to you.

Look at these pages. The old site is better than this new one.

Why is the favicon a shopping cart? You do board repair. It should be your logo. This reeks of “someone’s customizing a canned magento theme. “

This screams “Since he’s am not blind, he can see the small detail of the font size not matching and mail being spelled as main, on a mail in repair site in large words. But he is either incapable of figuring out how to make it all match with a few minutes of work, OR just doesn’t give a shit that he’s handing you his homework all crumpled up and used to wipe his ass on a $4600 site draft.”

You hired a pro. You know they can make all of this make sense with less than 2 minutes of effort before sending you a draft. If they don’t know how to do this, then they’re not going to know how to have a fast page speed(this site takes 20 seconds per page to load), make changes, or keep the design responsive on mobile, or deal with plug in changes. They’re just not qualified for this.

If it is the latter—they just don’t CARE. Then that is even worse. They’re ubreakifix or some other low quality chain. They’re handing me back a phone that has half of the screws missing and a screen lifted that will crack 10 minutes later and don’t even care. This means they couldn’t be bothered to keep the code neat, care about one box being larger than another later on, and just unable to be the author of the way you represent the face of your business—which hinges on people trusting your ability to deal with intricate complex problems and people’s sensitive data on a regular basis.

I need one of two things. I need to see a site that allows me to entirely forget what you have shown me up to this point; something so amazing, that is better above and beyond from what I had in every conceivable way; worthy of an American designer asking over $4000, or a refund. This is not what I agreed to.

I want to see something that I can be proud of here. I want to see you succeed. I really do. But, if you’re unable or unwilling to master this level of basic professionalism then I feel that you’ve misrepresented your ability to me when I agreed to the price, and I will do whatever I can do make sure that someone middlemanning for odesk at $4600 doesn’t happen to anyone else. 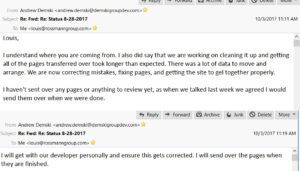 He says he has not sent anything over asking for a review yet. However, we’ll soon see this is not true.

This email from September 11th shows that 5 weeks in he was linking me to pages that he had worked on. You can see the results below.

If nothing was sent over to review, then why link me to this page?

He sent this email saying he worked on that page on September 11th. On October 3rd, I sent my email stating just how bad the site looked. On October 11th, one full month later, he links me to this page for review:

He says he hasn’t sent over any pages to review in the past. Here, he is proudly displaying something he spent two months on. Scroll further to see just what it looks like.

Look at this page. The random text centering. The form at the bottom that doesn’t belong, that leads nowhere. This is what The Demski Group presents to a client after two months. 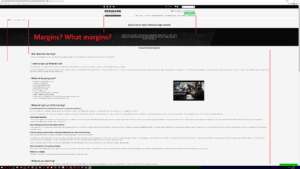 Note the random text centering at the bottom of Demski Group’s design.

At the end of the day, it was in the contract.

The entire risk as to the quality and performance of the Project is with the Client.

This is telling me point blank, that it is at my risk that I expect quality from Demski Group Dev. And indeed, I risked and lost. I sincerely hope anyone reading this understands exactly what they should expect to receive should they give Andrew Demski money.